We wholeheartedly agree with the importance of preserving non-partisan municipal elections in Ridgewood.

Fact #5: Consolidating Village Council elections with November general elections does not make them partisan or confusing.

Those opposed to shifting Council election timing frequently claim that November voters tend to vote straight down their political party’s column. They claim that voters either do not know that Council candidates aren’t aligned to a party or do not pause long enough to realize this fact.

In fact, many other communities with non-partisan elections have already solved this issue. For example, Mahwah includes a completely separate section for their non-partisan Board of Education ballot, using an offset table and columns disconnected from partisan races: 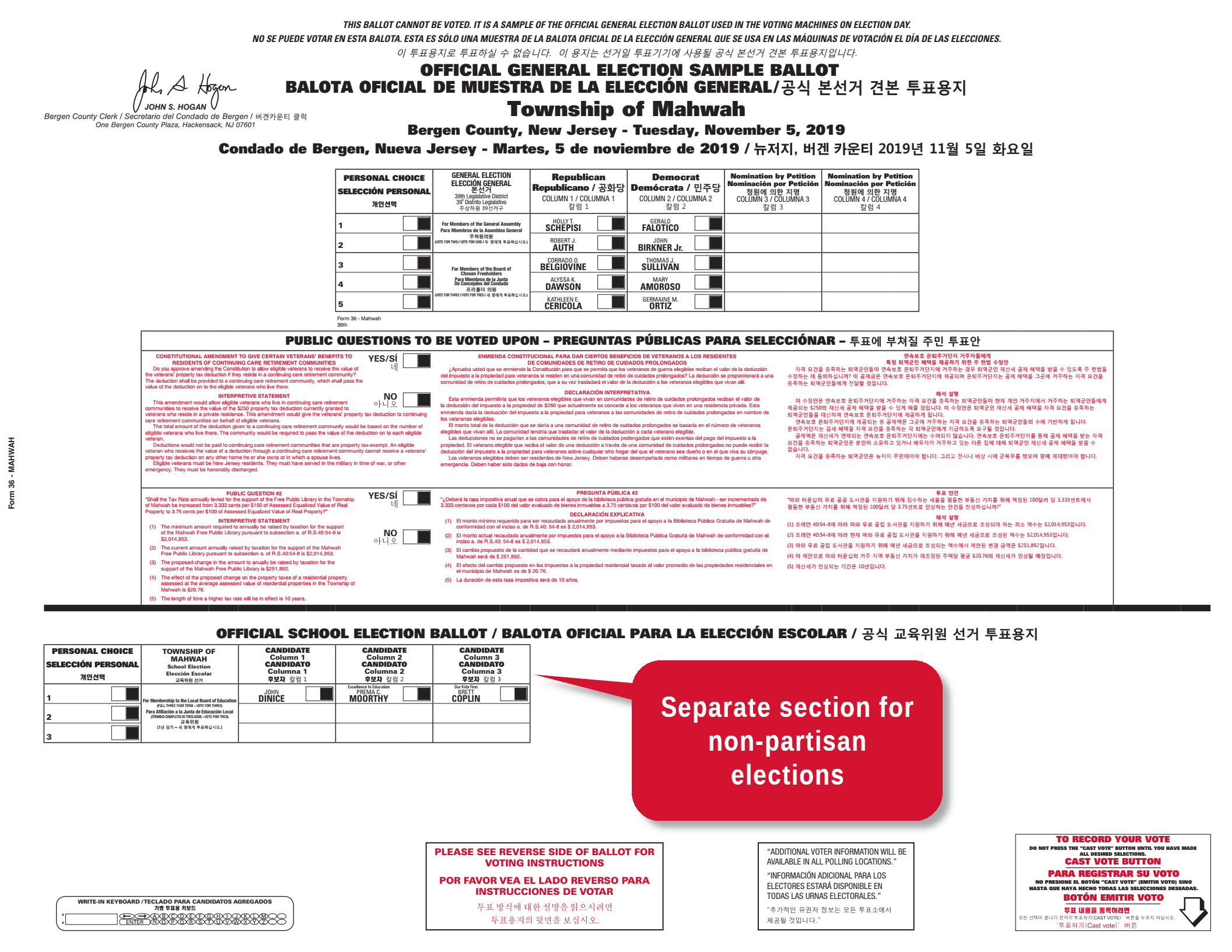 With Mahwah as part of Bergen County, our County Clerk already has experience with this type of ballot.

In addition, Cedar Grove, NJ holds both non-partisan Township Council and Board of Education elections during November general elections. They have designed a ballot which completely separates these races from partisan races:

Clearly, there are multiple ways to eliminate any confusion with partisan races.

Consolidating our local elections with the November general elections saves money, increases turnout, and does so without adding confusion or party influence.

As you may know, Ridgewood taxpayers have to pay for the cost of administering off-cycle elections, including the cost of poll workers, voting equipment, sample ballots, extra security, and so on. It adds up. By choosing to hold School and Village elections in April and May, we are incurring significant and avoidable expenses.

The Board of Ed election this past April cost our community $65K (up from the initial estimate of $42K when the April budget vote was reinstated). That equates to the cost of a high school sports program or the purchase of dozens of needed instruments for our music program. According to a recent news article, the last two Village Council elections cost an average of $49K. One Village election would pay for more than 100 trees through the Village’s Adopt-a-Tree program, which would help restore our badly depleted tree canopy. Or, that money could be spent on modernizing the Village’s website to make it more user-friendly. Off-cycle election costs could be cut from the budget or spent on other programs if all of our elections were consolidated to November.

Consolidating our elections will make better use of taxpayer dollars and improve voter turnout.

Ridgewood residents are asked to vote in numerous elections each year. There is no question that consolidating those votes into the single traditional voting day in November will increase voter turnout, save Ridgewood taxpayers money, and avoid unnecessary security risks in our schools. That said, holding school elections in November means that a separate vote on the school budget would only occur if school taxes increase by more than 2% in a given year. Some community members are disturbed by this, feeling that it is tantamount to “stealing their right to vote.”

We believe otherwise — that the best way to safeguard all citizens’ right to vote is to ensure that the voices of as many members of our community as possible are heard in every election. Given the higher turnouts in November elections (as documented in our prior communication), it is clear that consolidated November elections will maximize participation in the electoral process.

Fact #3: Ridgewood is one of only fifteen municipalities in NJ that currently hold an automatic and separate vote on the school budget. All of NJ’s 545 other municipalities hold their school elections in November.

Across the country there are very few states in which some or all school budgets go before voters.[1] Instead, the vast majority of voters around the United States come together in November (with higher turnout) to elect smart, like-minded representatives who reflect their values and ideals. These representatives can then roll up their sleeves and develop an expertise in the complex budgeting process — an expertise most voters have neither the time nor resources to develop. The New Jersey Legislature considered all this in 2012 when they voted overwhelmingly in both houses (34-3 in the Senate, 62-11 in the Assembly) to allow municipalities to move school elections from April to November, with no budget vote if the school tax increase is below 2%.

It is important to reiterate that if our Board of Education develops a budget that calls for a school tax increase greater than 2%, a public vote is required on that budget. And, no matter the size of the tax increase, school boards are legally required to hold public hearings on any proposed budget. Finally, school board members are held accountable for budget votes when they run for reelection. As an example, Ridgewood’s Board of Education recently heeded public opinion by voting to pass higher state aid through to taxpayers as tax relief.

We strongly note that by joining the vast majority of NJ and the country in consolidating elections, Ridgewood would not be taking away the right to vote; rather, we believe that consolidating our elections in November will increase our community’s ability to collectively be heard.