In advocating for election consolidation, the petitioners and supporters of One Village One Vote looked at the facts. We are comfortable restricting our ability to vote on the school budget in exchange for greater voter turnout, less money spent by our Village and less foot traffic in our schools. Why? Because the facts show that over decades, our school boards have created responsible and efficient budgets that are fair to our students, administrators, teachers and taxpayers while maintaining the excellence of our schools.

The facts are below. Read on for data that supports each fact.

Fact #2: Since 2010, the Ridgewood Board of Education has approved budgets that are within the state-imposed 2% budget cap. This fact remains consistent both in years that we have voted on the budget and in years with no separate budget vote. [More]

Fact #3: Like most other districts, Ridgewood’s property taxes are the primary funding source for the schools. Since 2010, the average assessed home has seen school taxes increase by an average of only $213.16 per year. This increase includes the 2016 voter-approved expansion of the kindergarten program to full-day. [More]

Fact #4: Ridgewood has the highest enrollment of any district in Bergen County. On a cost per pupil basis, which is an equalized measure of school spending, Ridgewood’s budget is very efficient. Historically, the Ridgewood Board of Education has held spending below that of comparable districts. [More]

Fact #5: As in the private sector, people and health care represent the greatest share of costs. It is primarily rising health care costs that drive these expenditure increases. [More]

Fact #6: The history of the budget vote in Ridgewood is interesting. In November 2013, after a ten-week process of presentations to the public, the Ridgewood Board of Education thoughtfully and with community input voted to move the April BOE election to November. By comparison, in July 2018, after only two weeks of public discussion–and at a time when many families were either away or simply not focused on school issues–the Village Council voted to move the BOE election back to April, despite the BOE’s request for more time for broader community input. [More]

Fact #7: Whether or not there is a separate budget vote, the BOE undertakes an extensive process every year to involve and educate the public with regard to the school budget. [More]

Fact #1: Voting to consolidate our elections will realign Ridgewood with the vast majority of voters in NJ and nationwide. In NJ, most districts no longer have a separate school budget vote; rather, they have chosen to run their school systems via a representative democracy, prioritizing greater voter turnout in November over a direct budget vote in the spring, subject to school tax increases of 2% or below. [Back]

Fact #2 & #3: Like most other districts, Ridgewood’s property taxes are the primary funding source for the schools. Since 2010, the Ridgewood Board of Education has approved budgets that are within the state-imposed 2% budget cap, regardless of whether or not there has been a separate budget vote. Over this period, the average assessed home in Ridgewood has seen school taxes increase by an average of $213.16 per year, including the 2016 voter-approved expansion of the kindergarten program to full-day. [Back] 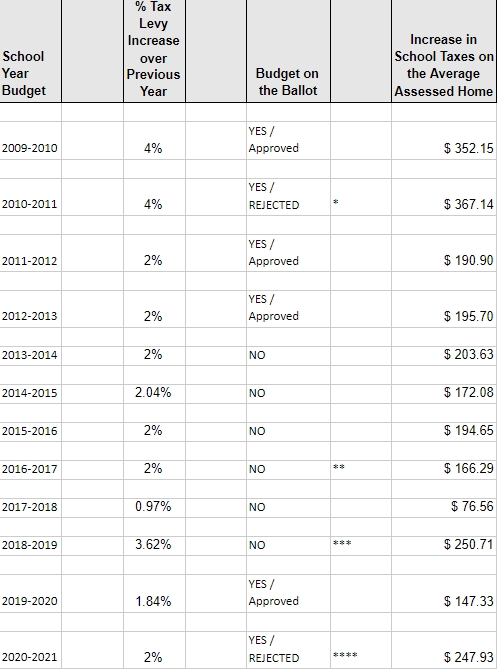 Fact #4: Ridgewood has the highest enrollment of any district in Bergen County. On a cost per pupil basis, which is an equalized measure of school spending, Ridgewood’s budget is very efficient. Historically, the Ridgewood Board of Education has kept spending below that of comparable districts. [Back] 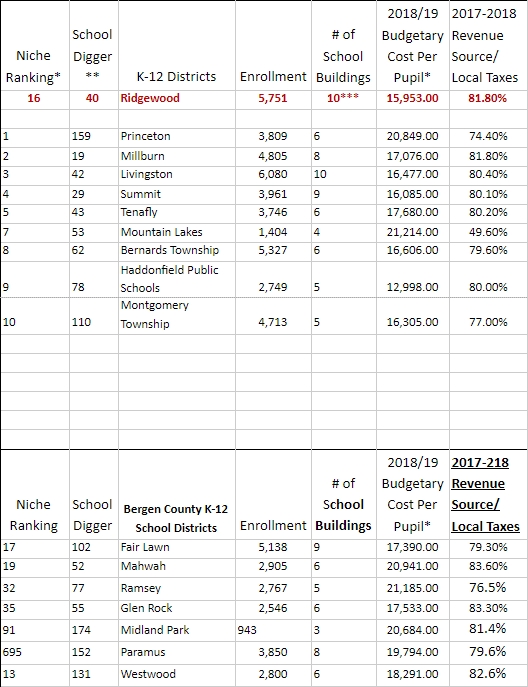 Fact #6: During September, October, and November 2013–nearly two years after being empowered by the State of NJ to do so–the Ridgewood BOE held discussions at BOE meetings regarding moving the Ridgewood BOE vote to November. During that ten-week time, there were 13 public comments on the issue from a total of seven unique speakers.

In November 2013, the BOE adopted a resolution to move the annual school board election from April to November by a vote of 4-1.

Minutes from those meetings can be found here.

In July 2018, over the course of only two weeks, with limited community input and despite a request from the BOE for more time, the Village Council voted to move the BOE election back to April.

On July 11 and July 18, 2018, a total of 17 people spoke at Village Council meetings asking the Council to move the BOE election back to April.

Minutes can be found here and here. [Back]

Fact #7: The public is educated on the BOE budget in the same manner regardless of a public vote.

The budget schedule begins in the late fall when the Superintendent and Business Administrator meet with each school principal and administrator to begin to identify needs for the next school year. These meetings continue through early January. The BOE and the public see the first presentation on budget assumptions in February. There are several presentations to the Board in public meetings throughout February and March. There is a Public Hearing on the budget in March. There are also two presentations to the public at GW and BF in the evening.

Last year’s budget presentation can be found here. [Back]

Be sure to sign up for emails at www.onevillageonevote.com in order to receive all of the latest information and learn how you can help support this change in our Village. Thank you.